I chat with Melissa Conway author of XenoFreak Nation 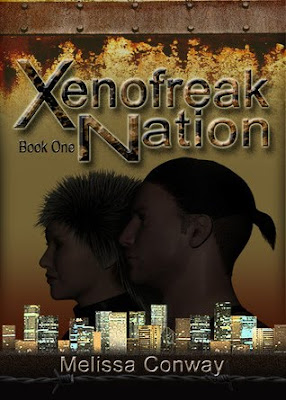 In writing what do you find the most difficult?

Shutting out the rest of the world in order to concentrate. As a wife and mother with pets, I often have to ask my muse to ‘hold that thought’ while I get up to take care of my family.


Where did the idea of XenoFreak Nation come from?

Probably, it began with a single, simple notion - perhaps I saw a tattoo of an animal-skin pattern and thought, “What if that were a skin graft?” But I don’t recall the exact moment the basic premise of the story occurred to me. It would have certainly begun slowly, and my imagination would have built upon it over time. At some point, it would have struck me that there might be a story there...


Bryn Vega is a really strong character, where did the idea come from for her?

Because I plot as I write, my characters develop as I go. Like all the people populating my stories, Bryn began nebulously and gained form and function as the story took on momentum. She is an ‘imperfect heroine’ because she makes mistakes. Those are my favorite characters to write, so I can show how they learn and grow by the end of the story.


How important is the relationship between Bryn and Scott in the story?

To me, it’s essential. I think romance is the stuff of life, and I make sure all my books have it in some measure. But in order to accommodate my male readers, I avoid treating it with a heavy hand.

XenoFreak Nation hits on politics, moral dilemmas, and discrimination, how do you feel this story relates to problems of today's world?

Today’s world is incredibly complicated. The average person is on the ‘user’s end’ of technology and politics, with a vague, conflicting notion that bureaucracy is a bloated but necessary evil to ensure checks and balances. If you dig into any system, you’ll find the history behind why it functions the way it does. And sometimes that function is tied to an outdated catalyst - why the system was set up in the first place. Xenofreak Nation is set twenty years from now and attempts to depict what will happen if today’s world maintains status quo. Whenever a system, like the one in the book that regulates how and why bio-engineered animals can be used, is caught between debating factions - some believe it could benefit from a good overhaul - others think it’s fine the way it is (generally because it benefits them) - any potential improvements are stalled until one side gains a majority of the power. The checks and balances can effectively halt progress.


Tattoos are either considered body art or something disgusting, you brought that into your story in such a new way. How important was that for you to showcase it in XenoFreak Nation?

By nature, tattoos make the body a billboard, saying either, “This image is important enough to me to permanently affix it to my body,” and/or “I enjoy using my body as a canvas for these images.” They are often used to stake a cultural claim, “I belong,” even if it’s just to say, “I belong among those who flaunt society’s expectations of me.” In Xenofreak Nation, the new tattoo consists of an animal skin graft, and there are ethical arguments for and against the practice. On the ‘against’ side, is the animal cruelty argument. On the ‘for’ side are those who insist that, just like using all parts of farm animals raised for food such as leather for our shoes, all parts of the animals bio-engineered to provide organs for human transplant should be used - and why not for decoration, like a designer pair of shoes?


What do you wish readers will get from XenoFreak Nation?

Hopefully a rollicking good read! But also a unique perspective on cultural tolerance - there is more than one side to any given story, no matter how abhorrent it may seem.

Where can readers buy XenoFreak Nation?

In one word how would you describe XenoFreak Nation?

Where can readers learn more about you?